Leading The Way In The Crypto Market By Innovating Not Imitating.

TROPTIONS stands for “Trade Options.” TROPTIONS is an asset supported trade system secured by the Bitcoin Blockchain.  TROPTIONS can be exchanged for Goods and/or services, other cryptocurrencies, cash or used to trade for offerings that are within or outside of the TROPTIONS network.

Education is the key in using Troptions!

If you can’t explain them you will never be able to use them!

WHAT ARE THE BENEFITS OF TROPTIONS?

TROPTIONS are Beneficial for a Holder to Use in Many Ways. 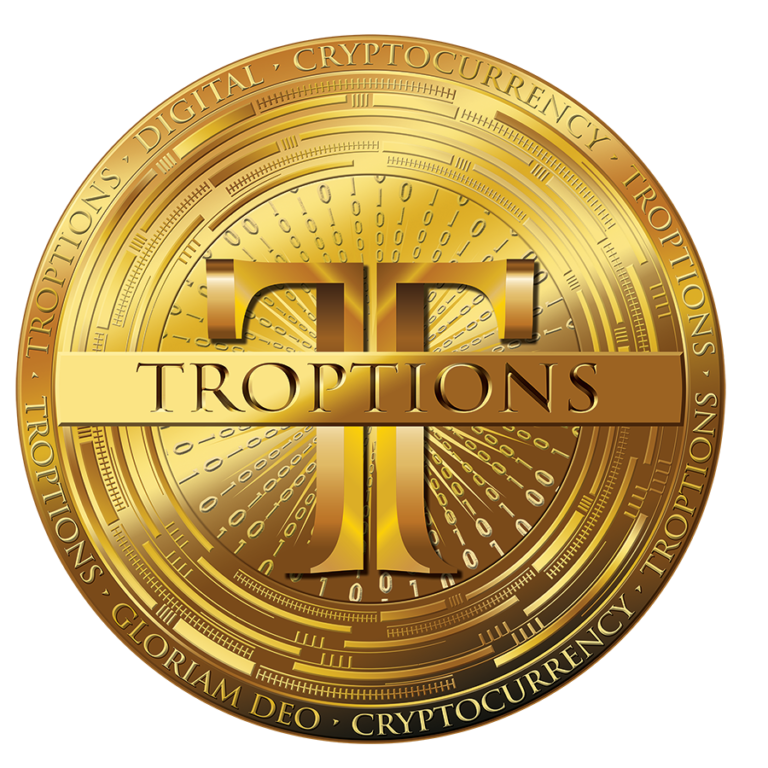 1. As an asset TROPTIONS have value, hold value, and can be used for savings of value.

2. TROPTIONS automatically gain in purchasing power as the holder has the option to trade for an increasing number of goods and services in the business, personal or investment categories.
3. TROPTIONS increase in value as the TROPTIONS holder increases in the knowledge of best practises of acquisition and utilization.

4. TROPTIONS grows in value with the level of demand in the TROPTIONS marketplace.

5. TROPTIONS allow for portability of immense wealth that is immutable (as much as is possible by man) due to the incorruptible distributed ledger on the Bitcoin Blockchain and encrypted for secrecy and security.
6. TROPTIONS provide divisibility and fractionalization. Each TROPTIONS can increase to an immense dollar value and still afford the ability of small purchases. Additionally TROPTIONS can be used to avert the old problem with barter, “How to divide a horse in half to pay for a pig.” A product or service valued in TROPTIONS can be exchange allowing the TROPTIONS holder to in turn spend whatever is appropriate to buy other products and services with no loss in value.
7. TROPTIONS are easy to acquire, relative to fiat currencies. TROPTIONS reside in a “blue ocean” of less contested abundance.
8. TROPTIONS are holder controlled providing “A Peer-to-Peer Electronic Asset Trading System” that requires no trusted third party record keeper and demands no gatekeeper.
9. TROPTIONS many times is the initial asset in a chain reaction of asset trades.

10. TROPTIONS found its niche as a financial instrument that helped dozens of small private companies raise capital and, in some cases, go public with millions of dollars in funding. Thousands of investors, some required to be accredited, used TROPTIONS to acquire millions of dollars in private and public stock. TROPTIONS are valued by deals that it’s done and assets it’s purchased such as Gold Mines,  Bonds, Real Estate, Cars, Boats assets ect. TROPTIONS is also valued like Bitcoin Supply & Demand. Arguably, this is the number one factor that determines the price of Bitcoin. This holds true for TROPTIONS also, but TROPTIONS holders have used TROPTIONS to purchase real assets which Bitcoin is mostly used as a Speculative coin which does not. The more people  that use or own something, the more it is worth. Bitcoin does not have a “real worth”. It is not backed by any sort of resource. Bitcoin and TROPTIONS are considered valuable for the same reason gold is valuable; it is difficult to acquire, there is a limited quantity of it, and people are willing to pay a relatively high sum for it because the coins will generally increase in value versus going down in value.

11.TROPTIONS can be used for: To Buy Goods and Services, Proof of Funds, Asset on Balance Sheet, Leverage, Collateral, Currency, Escrow Accounts, Finance, Sponsorships,  and much more!

12. Is TROPTIONS a Security? and the answer is NO!

A security is a financial instrument, typically any financial asset that can be traded. The nature of what can and can’t be called a security generally depends on the jurisdiction in which the assets are being traded.

Updated Jun 25, 2019 SEC Chair Jay Clayton has clarified that bitcoin is not a security. “Cryptocurrencies are replacements for sovereign currencies… [they] replace the yen, the dollar, the euro..
TROPTIONS is a crypto asset : they are not a security, nor does referring to TROPTIONS as an investment render it a security. TROPTIONS are decentralized like Bitcoin controlled by the people and not the banks. TROPTIONS transactions are recorded on a secure blockchain and no TROPTIONS have been the subject of an Initial Coin Offering (ICO)
TROPTIONS do not meet the “Howey” test. Therefore not an investment contract rendering them securities. TROPTIONS are not an investment contract under either Federal Securities law or the law of the State of Georgia.
TROPTIONS value is set by the marketplace and a function of blockchain. TROPTIONS has done billions of dollars of transactions and recorded on the blockchain which has been proven to be tamper proof. Troptions has an ecosystem of businesses that accept Troptions.
On April 2, 2019, the SEC issued a no-action letter with respect to “Turnkey Jet, Inc.” The SEC concluded that a token (like a Troptions coin) could be offered and sold without registration under the Securities Act and Exchange Act, effectively precluding its designation as a security.
The use of Troptions does not violate any security laws.
TROPTIONSXCHANGE.COM

Where Is The Asset called TROPTIONS Located and Why?

TROPTIONS resides on the Bitcoin blockchain. And is encoded there, by way of an open source
protocol named Counterparty. The Bitcoin blockchain was chosen as opposed to an
independent TROPTIONS blockchain, because it is the strongest and most tested blockchain in
the world. Therefore the asset, TROPTIONS, has no need to focus on or commit resources to
platform stability and node maintenance.

How Are TROPTIONS Mined or Acquired?

1. Mined with the Mind

TROPTIONS are all pre-mined. Some are locked so that no more can be added and some are not so that future demand can be met. Troptions Corporation (“TC”), with many other TROPTIONS holders, has developed a greenhouse environment of with over one billion dollars worth of examples of TROPTIONS used in the trading for a wide variety of goods and services including: Land purchases, hotels, NASCAR sponsorships, surplus 6 capital for insurance companies, precious and semi-precious metals and gemstones, mining claims and rights, stock in private and public companies, exotic and classic automobiles, buses, entire companies, funding for cities, and broadcast licenses.

TROPTIONS didn’t start by promising proof of use in the future, but by proving use now and continuing into the future.  TROPTIONS holders are interested in funding projects with TROPTIONS, lending TROPTIONS for projects and paying commissions of TROPTIONS for those who present viable deals.

You can mine TROPTIONS with your mind by doing a deal or presenting a deal.

2. Acquire with Other Assets

The TROPTIONS holders have developed and promoted a TROPTIONS Trading System environment which assists companies, individuals and countries in the following activities, and more:

1. Consulting with a company’s top management to uncover hidden assets that have been previously unexploited as TROPTIONS purchasing power.
2. Suggesting the best practices to convert previously undiscovered assets into usable purchasing power through TROPTIONS.
3. Assisting a client in entering a TROPTIONS market where TROPTIONS holders are assisted in facilitating transactions with other holders that increase revenues, reduce excess inventories and acquire needed goods and services while preserving fiat cash flow.
4. Setting up and staffing a TROPTIONS asset department or training existing staff of TROPTIONS holders for the purpose of expanding the use of TROPTIONS for additional competitive advantages.

How Are TROPTIONS Transferred?

TROPTIONS resides on the Bitcoin blockchain and therefore can be transferred from digital
wallet to digital wallet with a small Bitcoin fee.

You do as a TROPTIONS holder. Wallets on the Bitcoin blockchain that are Counterparty
configured and have TROPTIONS in them are the owners of TROPTIONS.

EXAMPLES OF PURCHASE'S MADE USING THE XTROPTIONS BUYING POWER!

A MOMENT IN DESTINY